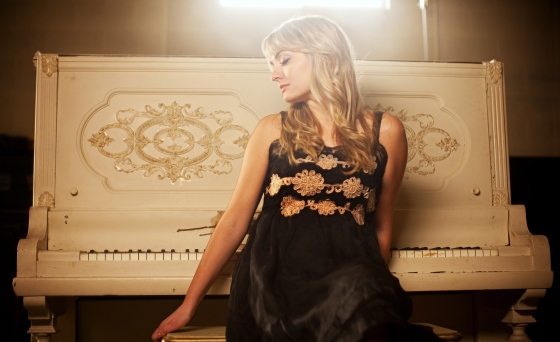 Anna Gilbert, a singer-songwriter living in Portland, Oregon, composes songs about life, love, and loss. Gilbert’s songs are from the heart, and she hopes she can bring warmth, truth, and sweetness into the heartbreak and sadness that affects us all. Gilbert also spends much of her time collaborating and co-writing with other artists in addition to pursuing her own musical endeavors. She has collaborated with Charlie Peacock, Jeremy Larson, Daves Highway, Peter Hollens, Sam Ashworth, and Nate Botsford, just to name a few.

The Oregon native’s childhood memories are suffused with sound, melody, and the songs of James Taylor and Ricky Skaggs, Paul Simon and Joni Mitchell. Her father was a music major and teacher before becoming a minister, and both her parents performed in a bluegrass band that performed regularly. Gilbert followed suit, writing songs and accompanying herself on piano or guitar. While studying as an English major in college, her musical journey continued when she signed an artist-development deal with Grammy-Award winning producer Charlie Peacock (The Civil Wars, Brett Dennen, The Lone Bellow) after a chance meeting in Seattle.

“She’s the surprise you’ve been waiting for,” Peacock claims, “Not only are her music skills in order, her personality is magnetic. She’s the kind of artist I love to work with — daring, teachable, funny, loving, and serious all at the same time.”

Peacock and Gilbert recorded her first full-length album “Your Love My Medicine” – an experience that would further establish her underpinnings as a budding singer- songwriter and earn her awards in her home town as “The Next Big Thing” and “Inspirational Artist of the Year” at the “Indie Momentum Awards” in Nashville, TN.

In 2009 she collaborated with Sam Ashworth and Matt Slocum of platinum-selling band Sixpence None the Richer for her “Like a River” EP and followed that up in 2011 with a holiday release entitled “Christmas” which she co-produced with band mate Wilson Parks.

In November of 2013, Anna released her album “The Able Heart”, which made it to #27 on the iTunes Singer-Songwriter charts. “The Able Heart” is produced by Jeremy Larson, and features MUTEMATH’s Todd Gummerman on guitar as well as Singer-Songwriter, Jordan Lawhead (Jason Reeves). She released another record entitled “August Heirlooms” in 2015 with Larson, and it features acoustic, upbeat songs written with bandmate, Matt Salinas.

In 2016, Gilbert collaborated on three holiday songs. One of the songs, “December Song”, was released by Peter Hollens. “Calling on Heaven” was a co-release written with Nate Botsford, and Gilbert also released a version of “O Come, O Come Emmanuel” that she arranged with Wilson Parks and Jeremy Larson.

Although Gilbert and her band have spent the past few years touring the West Coast, Gilbert considers herself primarily a songwriter. She has written and sold songs with WORD Publishing, FOX, and Twenty Ten Music in Nashville, TN and has a song featured on the soundtrack for the Fox Movie movie “Change of Plans”.

“I’m not an entertainer as much as I am, first and foremost, a storyteller and songwriter,” Gilbert states, “I am a chronic social sponge when it comes to what’s going on around me, but I always try to put the glories and disasters of the human experience into my songs in hopes that it will lift people’s spirits and give them peace in life.” And she does. Her down-to-earth femininity injects playfulness and adventure into the simplicities of every day life as she brings you into her memories and into her home with songs that become the soundtrack to life – telling stories we all know – stories that are ours.